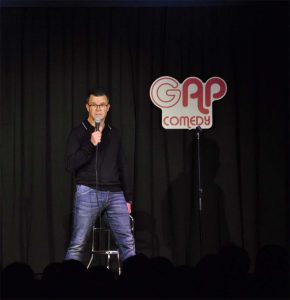 In response to demand for more ticket availability, Gap Comedy hosted two nights of comedian, author and broadcaster, Dominic Holland, at the Goring Hall in early October. The result was two sellout shows, continuing to demonstrate the appetite for top quality comedy in our locality.

With his mass of material and vast experience, Dominic owns the stage and delivers the goods. Diffident, almost to the point of bewildered at times, Dominic walked us through a trail of first world problems such as favourite children, the dilemmas of kitchen worktops and dinner guests requesting to plug in all kinds of devices. Such subjects clearly resonate with the Gap crowd, many of whom, it seems, also have an ongoing love affair with John Lewis.

On both nights, the audience reacted enthusiastically to Dominic’s brand of humour – feel good comedy in the best sense.  His act is non-political, mainly stories and anecdotes touching on his home and family life. A notable aspect is his experience of being the father of the Spiderman film star Tom Holland.  To his credit, he honestly expresses his conflicting emotions of having a son who in his own words has “eclipsed” him in the same industry. He’s clearly hugely proud of his son but also admits to pangs of jealousy at his success which he writes about in one of his books. His show ambled through the joy and pain of family life and in getting the balance right, he endeared himself to the audience from the start.  On both nights, some healthy banter with his audience produced the odd gem -“And what do you do, sir?” he asked. “Reindeer handler” was the unexpected reply. It was a fantastic professional performance and the audience reciprocated with laughter and applause.

Next up at Gap Comedy is Simon Evans on 12th December, to round off another great year.  We have top well known TV acts already booked in for Wednesday 12th February and Thursday 24th April 2020 so please visit our website: www.gapcomedy.co.uk and sign up for earliest news on booking.