Almost three years ago, Simon Evans performed the first true Gap Comedy gig in the not-quite-full Morrell Rooms. Cut to present day and sitting in the larger, fully equipped Goring Village Hall with polished ticketing system, well stocked bars and an almost entirely new audience, it’s hard not to get a sense of just how much Gap Comedy has evolved.

In ‘Genius 2.0’ however, Simon Evans remains very much in the same vein. He is an assured, relaxed performer – the delivery is clear, confident and at a strident pace throughout. The jokes are solid and quick fire rather than long form, describing his glasses as giving the appearance of a false nose, his hair as ‘erosion’ rather than a bald patch and suggesting that prostitutes in Brighton might need a badge to differentiate themselves from party goers. 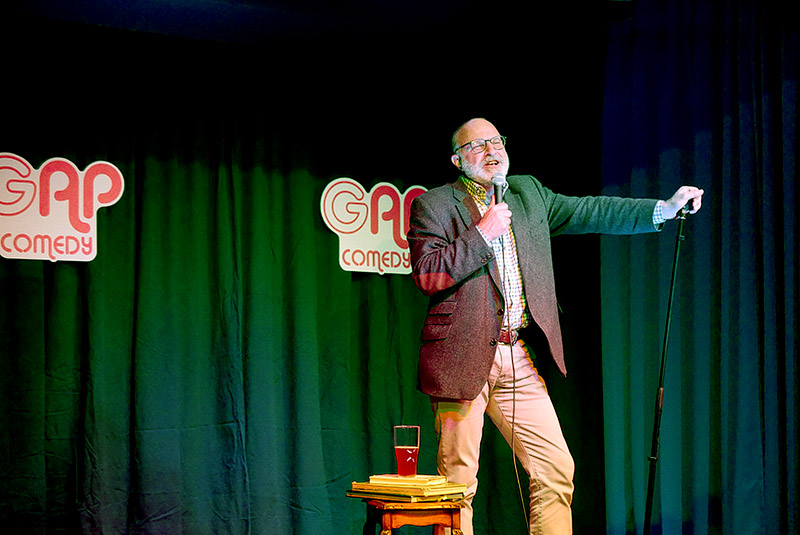 The performance date being that of the election is not lost on Evans (if we’d known, he tells us, we certainly wouldn’t be watching him) and his ability to talk at length about Brexit, socialism and the generational divide without alienating swathes of the audience is a real skill. It’s the last act where Evans moves from his political and cultural centre ground into more awkward and less well spirited territory.

A self-described ‘intellectual snob’ (but with a 2:2 ‘drinker’s degree’), he is determined to stress how the cerebral landscape has receded over the past few decades, something he tries through a Guinness World Records book comparison (a version from his 9th year and the 2017 equivalent of his son’s). Overall Evans is a reliable provider of laughs – his material is extremely well pitched either by skilful booking or his own revision to the Goring audience (‘first time he’s had to avoid slipping into Nazi nomenclature’ when introducing himself). Hopefully he’ll come back for a third time with a greater focus on that winning recipe of good-natured self-deprecation and genial social commentary.

Next up at Gap Comedy is Andy Parsons on 12th February. We have another well known TV act booked in for 23rd April 2020 so please sign up to our mailing list for earliest news on booking.