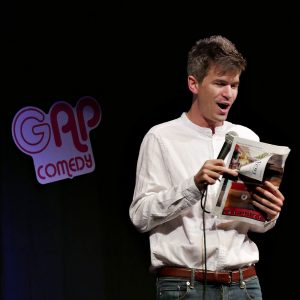 Inevitably there had been a number of cancelled and rescheduled dates as a result of the pandemic and this was the first comedy night for 20 months. A performer who’s appeared on ‘Live at the Apollo’, ‘Have I got News for You’ and Radio 4, with a fast-growing fanbase, Ivo Graham proved his credentials by quickly establishing a rapport with the audience from Goring, Streatley and South Stoke. Expecting the ‘rivalry’ to be between the two main villages he was able to riff hilariously about South Stoke, North Stoke and ‘Central Stoke’.

With a copy of GGN in hand, he successfully wove the appointment of a new manager at the community shop in South Stoke with the challenges of filling vacancies at Goring’s Community Centre – his wry observations and analysis of village life were instantly relatable, and much appreciated by the audience.

Ivo Graham’s never tried to hide his privileged background (he’s an Old Etonian) and this not only contributes to his appeal (he has a disarming charm) but provides fertile ground for his material. As his father advised, “you’ve just got to own it” although Ivo suggested that might have been a reference to land, not his education. Clearly not many stand-ups would be invited to play in a boules tournament with M.P Joe Johnson and then have to explain “boules is really just another version of petanque”.

The second half of his act involved an eloquent description of his experiences as a new father, his embarrassment at a go-karting stag ‘do’ in Acton with groups of 9-year olds and winging his way through a dental appointment when he hadn’t used the appropriately coloured TePe brushes.

The palpable sense of audience anticipation before the show was amply repaid by this easy raconteur whose self-deprecating style played well in this setting. Indeed the rapturous applause at the end of his set confirmed this.”