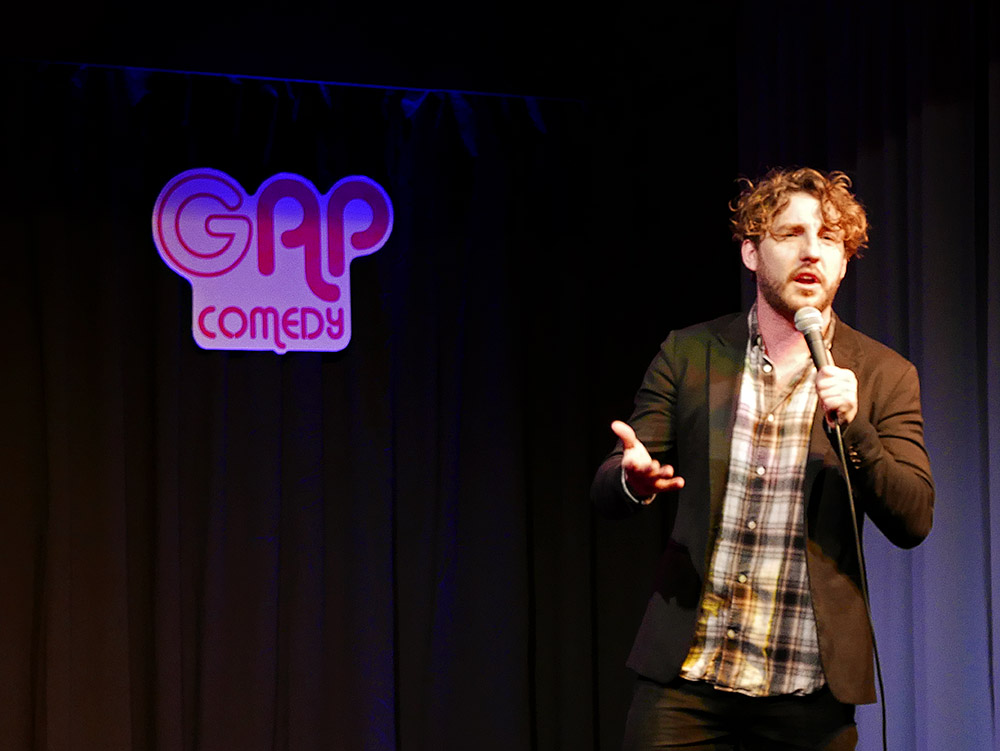 On a blustery February evening we were treated to a raucous evening of entertainment from Seann Walsh (of Strictly fame) supported by comic Dinesh Nathan – the first Gap Comedy event of 2022. Nathan opened with a relaxed, languid style as he reminisced about growing up in Crawley, bribing his children and many reflections on his ‘ambiguous’ heritage (ineffectually shouting ‘black lives matter’ as a defence against a pursuing mother). Immediately calm and assured, Nathan did a great job of warming the audience up with an enjoyable, comfortable set.

Seann Walsh’s style could not have represented more of a contrast. Raucous from the off, he faced into the Strictly controversy by comparing his vitriolic treatment in the media with the relatively sympathetic response Phillip Schofield received – the details of which are best left in the village hall. Given last time out we had Lucy Porter pitching a perfect Brownies tribute, it’s a testament to both Walsh and the Goring audience that both were able to switch gears so dramatically for what was an altogether more theatrical, coarse and lively delivery.

Audience interaction is not usually a hallmark of Gap Comedy but there was plenty of it on the 18th. After an initial discussion with ‘the poshest guy I’ve ever heard’ about the nature of their respective infidelities, Walsh dealt with further heckling in what he described as ‘the weirdest gig I’ve ever done’. Familiar material was on offer (complaints about self-service checkouts were hardly ground-breaking) but Walsh was his best when he was at his most transgressive and animated – speculations about a Soho-skulking Thatcher, affairs around the Goring Gap and the impossible dream of a good night’s sleep as you get older.

Walsh capped off an animated performance with a re-enactment of the only possible situation his recent personal training could have prepared him for – lunges for the briefcase bombs and squats to duck from bullets in a ‘Die Hard-esque’ finale . Despite his tongue-in-cheek claim early on that, considering the awful weather, he wished the evening had been cancelled, in a set that spent lengths extolling the joys of missing out and doing nothing, the enthusiasm throughout suggested this was a show that he had very much enjoyed – and the riotous reception of the audience at the close was evidence of mutual appreciation.